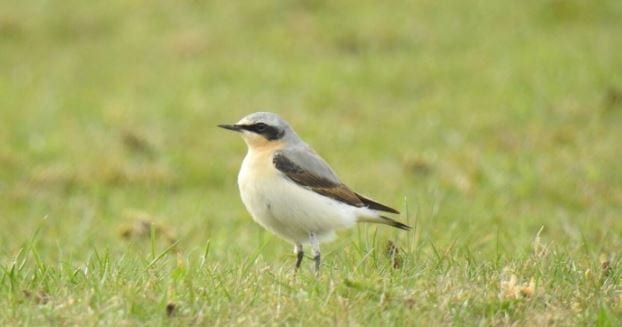 My aim is to give you an idea of some of the things you might see or find around the farm.  I hope you will find it interesting and informative, and hopefully feel inspired to go out and explore the farm and its surroundings.

I have lived in Winsley for over six years and have spent that time exploring and enjoying the surrounding countryside.  So far around the Winsley area I have recorded over 70 species of bird, well over 100 types of plant and in excess of 300 species of butterfly and moths.  And still finding new things…

For this first instalment we’ll be focussing on the things to be looking out for in Spring.  This is possibly the most exciting season with the passing of the cold and gloomy months of winter and the anticipation of things to come.

It’s a rejuvenating experience to be out and about at this time of year.  Although there’s no guarantee of settled weather, if you’re prepared to brave the occasional shower and get your feet muddy, there’s plenty of things about to reward your efforts. 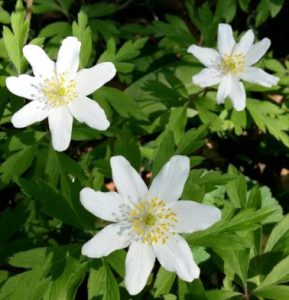 Hartley Farm is situated just up the hill from the Avon valley.  It comprises mainly of grassland pasture and hedgerows, with dry stone walls running alongside the country lanes that interlace the fields.  To the west lies an expanse of mature mixed woodland, where in spring you can find a host of flowering plants, eager to make the most of the available light before the leaves of the canopy close in, bathing the wood in shade.  The quintessential woodland scene is a carpet of bluebells, anemones (pictured, white flowers) and celandines (pictured, yellow flowers), all of which can be found here.

For those with a keen eye there’s also the unusual and bizarre toothwort, a parasitic plant that steals food from the roots of its host, rather than photosynthesising.

Woodruff is abundant here too, with its rosette of leaves 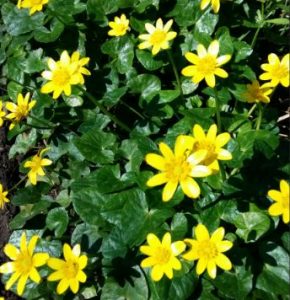 and tiny white flowers, it is an attractive yet unassuming plant, once drunk as tea before our modern brew became popular.

Spring sees the first flush of colour in the fields, with dandelions bursting open seemingly overnight, turning the pastures golden.  The hedgerows lined with blossom, first blackthorn and then hawthorn. The verges covered in tall, white flowered cow-parsley and hedge mustard.  Bees of all kinds will be making the most of this sudden glut of nectar, along with the first butterflies of the year.

It’s also a busy time of year for birds too.  Things are on the move the world over, as the race begins to get from the wintering areas to arrive at the breeding ground.  The early bird, in this case, gets the choice of the best breeding territories.

In the last few weeks we have seen the arrival of the first summer visitors of the year; Chiffchaffs, Blackcaps and Common Whitethroats have all been singing.

Swallows are building in number.  These graceful, acrobatic birds epitomise the summer months here on the farm, nesting amongst the rafters in the stables.  It’s always nice to welcome them back after their long journey from South Africa, where they spend our winter months. 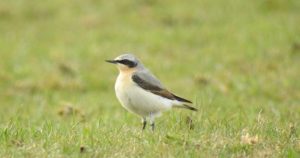 Some birds you may encounter around the farm at this of year, don’t breed here, but are stopping off to refuel whilst on passage elsewhere.  Until around mid-May you might be lucky enough to see a Wheatear (pictured).  These strikingly marked birds favour the short, grazed grass of the horse paddocks and sheep fields.

Most of these birds will be heading north to the moors of England and mountains of Scotland, to breed.  However some of these will be making the incredible journey to their breeding grounds in Iceland and Greenland; one of the longest migrations of any small bird.

The farm is home to many resident species of bird.  Large numbers of Rook and Jackdaw spend their days foraging for grubs in the fields.  Here you will also find Skylark, which, although declining nationally at an alarming rate, can be found all year around.  It’s melodious song, broadcast high up whilst on the wing, is synonymous with a sunny English day.  They are ground nesting birds, favouring meadows and fields, so it’s always best to stick to footpaths to avoid disturbing them. 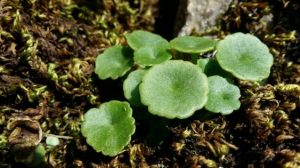 We are lucky here to have an extensive network of dry stone walls, some dating back hundreds of years.

These structures create a habitat of their own, and closer inspection will show a variety of plants, mosses and invertebrates.  Animals use these mosses to line their nests, whilst the bugs provide food all year round.  Reptiles such as slow worms and common lizards shelter amongst the stones.

Look out for the miniature flowers of Dove’s-Foot Cranesbill, Rue-Leaved Saxifrage, the unusual but aptly named Navelwort (pictured) and the yellow carpet of Biting Stonecrop. 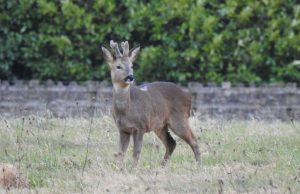 Our largest resident (apart from the cows) is probably the Roe Deer (pictured).  These shy, elegant creatures can sometimes be seen grazing around the edges of the fields, usually early in the day, or late in the evening.

Many other mammals call this area home, most noticeably rabbits, but also foxes, hares, stoats, weasels and bats.  Evidence of these animals is easier to find than the creatures themselves.  Check muddy puddlies after rain for signs of footprints, more often than not they be just dog prints, but if you’re lucky you might find something wild.

Whether it’s a sunny day in spring, or a storm in winter, there’s always something to be discovered, so, seek and enjoy.

All findings and photos by Matt Ames

For more information, try the Wiltshire Wildlife Trust page, and if you’re off exploring, don’t forget the Countryside Code!